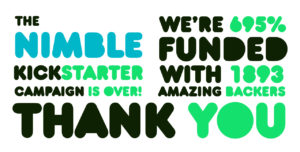 Version22 recently completed their Kickstarter campaign for their second product Nimble. Nimble is clever little device that allows you to...